At the start of my summer internship with NCC Group’s Cryptography Services (CS), I was told to find a research project that interested me. I have a background and interest in post-quantum cryptography, so when I came across FALCON, a lattice-based cryptographic signature algorithm, I got excited. My background is more on the theoretical side (as theoretical as an undergraduate can get), and I would not consider my self an especially experienced software engineer. The work being done on FALCON at NCC Group, specifically by Thomas Pornin, was all implementation based. One such implementation was the cxm4 version of FALCON. This version, as the name implies, targeted systems with an ARM Cortex-M4 microprocessor, a popular choice for embedded system. I jumped on the opportunity to gain more experience with cryptographic implementation, but also learn something completely new in embedded systems.

At the start of the project, Thomas told me that the implementation of FALCOM-cxm4 needed to be kick-ass; he then defined this for me.

The following blogpost goes through some quick background, and then presents notes for complete newbies on developing for ARM. More accurately, I should say, notes on how not to develop for ARM, as the real lessons come from things I did wrong. Lastly, although, this was a cryptographic software project, most everything I say related to ARM development broadly applies to software projects of all sorts.

As previously mentioned FALCON is a post-quantum signature algorithm. Thomas and a number of other cryptographers have been working on the project for a number of years now, and in January FALCON was announced to be one of the round 2 candidates for the NIST Post-Quantum Cryptography Project. The name is an acronym for “Fast-Fourier Lattice-based Compact Signatures over NTRU”…quite a mouthful, so we will just stick to FALCON. As the word post-quantum implies, FALCON aims to preserve its security even against quantum capable adversaries. Adversaries would be able to break many of the asymmetric encryption and signature schemes (e.g., RSA, DSA, and ECC) with ease when a general purpose quantum computer is realized. FALCON aims for strong security as it comes to leaking the secret key through simply observing any number of signatures, short keys and signatures, and fast signing and verification. Moreover, FALCON avoids key recovery attacks that plagued previous lattice-based signature schemes, such as GGH and NTRUSign. Above all, FALCON uses very little memory making it a good choice for embedded systems. The FALCON website has more information, including the specification document and a browsable source code tree.

The Cortex-M4 is a popular choice of micro-controller for the embedded market, especially when digital signal processing is needed. The MCPU is based on the ARMv7E-M Harvard architecture and supports the Thumb and Thumb2 instruction sets. Notable for us was the constant time 32-bit hardware integer multiply and constant-time 32-bit hardware bit shifts. The Cortex-M4 also has optional floating point support, but only supports IEEE-754 single precision (binary32) format.

As glanced over in the introductions the implementation had a number of necessary goals to accomplish. Security (constant time code) and speed were on the forefront. Since, this implementation targets embedded systems it is also pertinent that the code be highly efficient as to not bog down these low power machines.

Specifically of interest to me was that key generation and signing in FALCON involve the use of complex numbers, which can be approximated with IEEE-754 double precision (binary64) floating point numbers. This presents a problem when targeting the Cortex-M4. As mentioned above, the processor optionally supports single precision floating point numbers only. How do we solve this dilemma?

The solution is to emulate binary64 floating point numbers using a 64-bit unsigned integer type, the uint64_t type in C. Recalling introductory computer architecture class, the first bit is the sign bit, the next 11 are the exponent (-1022 to 1023 range), and then a 52 bit mantissa. Of course it’s necessary that all of the floating point operations we need be crafted ourselves for this emulated type. Moreover, since the Cortex-M4 is a 32-bit processor this emulated type, denoted fpr from now on, be stored over two registers in the processor.

To heavily speed up performance of FALCON for the Cortex-M4, the cxm4 version was created. The cxm4 version features handcrafted ARM assembly version of fpr functions inlined into the code using GCC naked functions. These fpr functions and all others functions that dealt with sensitive data needed to be constant time to avoid side channel attacks. For a primer on constant time cryptography refer to Why Constant-Time Crypto?.

The specific focus of my work was the so called fpr_expm_p63 function, which computes a polynomial approximation of exp(-x) where x is an fpr type. It is extensively used during signing.

I learned many things over the course of the project; unfortunately many of those things came the hard way. First off, it must be said that I really didn’t know anything about the ARM architecture before starting this project, so I spent a good amount of time reading (sometimes skimming) the technical manual from ARM on the Cortex-M4, the ARMv7E-M architecture, and the Thumb2 instruction set. I don’t think any blogpost can substitute for that, so if you really want to learn this stuff open up your favorite search engine, acquire the appropriate manuals, and get reading. However, keep reading this post to avoid the mistakes I made, and additionaly for some entertainment.

DO NOT DO THE THING I AM ABOUT TO DESCRIBE (PROBABLY)

The following describes the debugging setup I used. I would write my handcrafted asm in .s files with my editor of choice (emacs) and then use the GCC ARM cross-compiler tool chain to assemble and link the file, qemu-arm to run the binary, and gdb to debug. qemu-arm provides user-space emulation, allowing you to run a binary with ease on Linux. I will describe why this is actually an issue and what you should do instead.

It is assumed you are running some version of Linux. 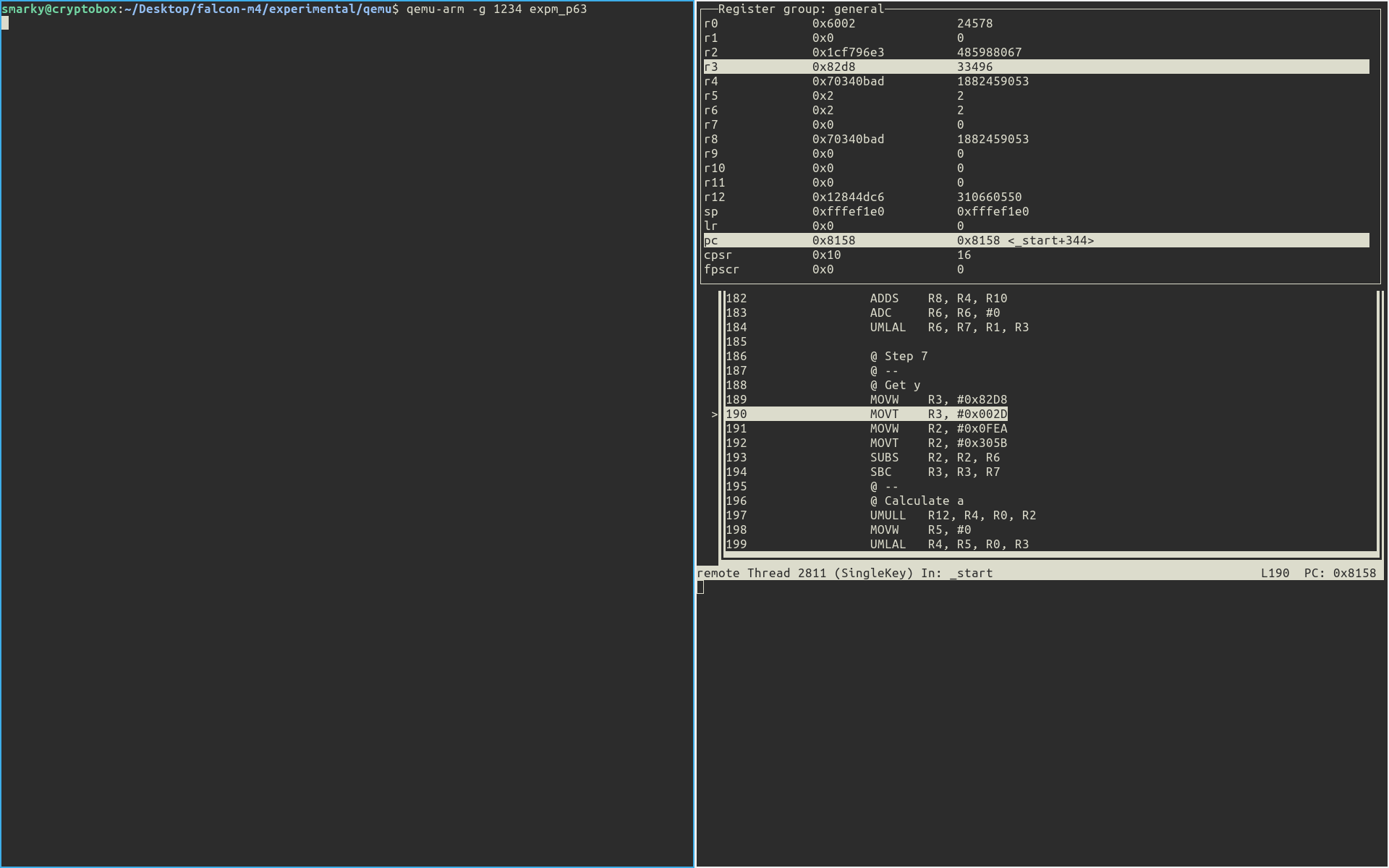 Another issue is that this setup is not very scalable. It does not work when trying to test the entire signature scheme. This setup may be fine for those just wanting to play around with snippets of ARM assembly, but for serious projects you are definitely going to need something else. The something else I suggest is the GNU MCU Eclipse project, which provides plugins for Eclipse and a series of other tools (specifically geared with the Cortex-M series in mind) to test projects of FALCON’s size. I highly recommend checking out the linked website and reading the wonderful documentation to get a project rolling.

When it comes to testing on hardware the STM32F4 seems to be a good choice. Testing with hardware is beyond the scope of this post, however.

There are unsigned 64-bit left and right shifts called in fpr_expm63(). Note these shifts occur on the underlying integer type, not the emulated type. Thomas implemented a generalized constant time version of these functions in C in the FALCON source. The functions seemed simple enough so I decided to start here for my first ARM assembly programming experience. 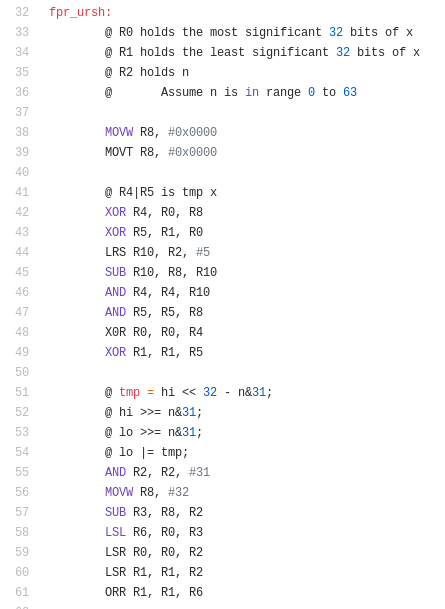 I was quickly told by Thomas that one could do better than what I did (in fact, that one could write more than half the number of opcodes that I wrote). He told me to compile and disassembles a simple function that takes a uint64_t as input, an int as a shift value, and returns a uint64_t shifted right by the shift value - one line of C with one bitwise operation. An astute observer may also note that the endianness in the above assembly I wrote is also wrong. This was also an issue that I realized unfortunately late and took some time to fix throughout my code. 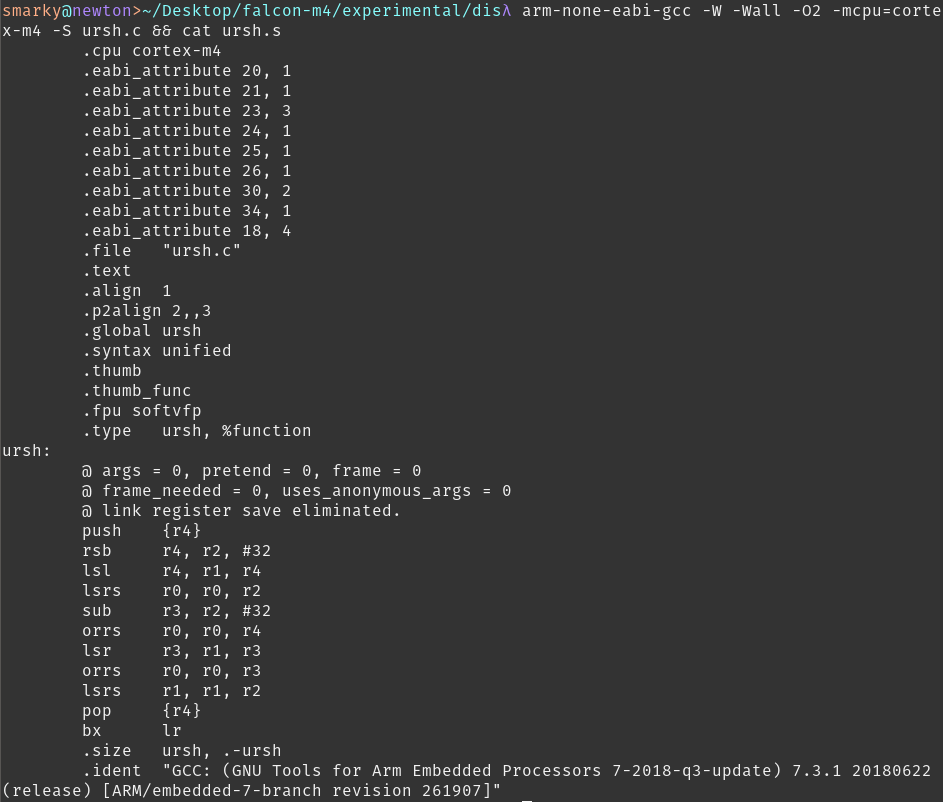 As you can see, ignoring the function entry and exit there are eight simple constant time operations to right shift a 64-bit unsigned value created by the compiler. The lesson is to not assume things and use the compiler as a tool. I assumed that the output of the above simple C snippet would not be constant time, something I should have checked. Moreover, throughout the course of the project, I used the compiler as a tool to get ideas when it came to particularly scary looking bits of c code.

A Scary Bit of C Code

There were a number of other little bugs along the way. There always is, it seems. One that was particularly frustrating took me two days to discover and fix - I was loading test parameters in the wrong radix. 3002 != 0x3002. Ultimately, this very frustrating bug may have been a net good, as I improved my code and shaved off some more cycles trying to identify this bug.

The table below contains the results of my efforts versus the assembly output from the compiler. I saved a few cycles handcrafting the smaller functions called within fpr_expm_p63, but the big speedup came from handcrafting the inner logic of the fpr_expm_p63 function. It was to quantify the exact speed up because I saved a lot of overhead from not using branching, loading, and storing instructions. Moreover, the “inner loop” (the meat of the function) I wrote uses less cycles than the compiler’s output. Note: I estimate a cycle equals an opcode; in the asm I wrote this is more or less true.